Myopia, or more commonly known as nearsightedness, is quite a common disorder found both in children and older adults. The condition is a refractive error in the lens of the eye, which results in nearer objects appearing clearer while further objects appear blurred.

Nearsightedness is caused when the natural focal length of the eye becomes too powerful and the eye becomes elongated. As a result, the image is formed in front of the retina instead of on it, creating a blurred and unclear effect.

The actual cause of myopia is still in debate, though some theories have been provided, the most common of which says that staying too close to screens and books leads to nearsightedness, though this theory still need to be proven.

As much as the bodily cause for nearsightedness is not very well understood, but treatments are available. Most of the time, people opt for concave lens glasses to correct their vision. However, contact lenses, and even laser eye surgery has been known to be just as effective, though a bit more expensive.

Hyperopia, or more commonly known as farsightedness is a medical condition in which the person is able to focus on further objects, but nearer objects seem blurry. This is in effect caused by the eye becoming too short, or is the result of the lens losing its natural power. The disease is most common among adults.

Farsightedness is usually corrected by eyeglasses with convex lenses, although laser surgery and contact lenses have recently seen the light. Another modern technique used to correct the farsightedness is to get refractive surgery done which completely alters the shape of the cornea and therefore increases refractive vision. There are several choices and options you can go for, as there are a wide variety of eye surgeries from which you can choose from. However, we would highly recommend you to consult with your eye care professional first.

How to determine if you’re farsighted or nearsighted?

Let us talk about the basics first, when you are diagnosed with farsightedness or nearsightedness, the eye care professional will probably hand you a prescription and they will also inform you of the degree to which your eyes have been affected.

There are two ideas you will need to keep in mind when attempting to read or comprehend the prescription: “OS” and “OD”. These terms define the degree of nearsightedness or farsightedness to the left eye and right eye respectively.
The next part is relatively easy as it involves a single number that indicates the power of the lens which you will need in order to sharpen or correct the images for your eyes. If, for example, this power is in positive range, then you have been diagnosed as farsighted. The higher the number, the greater degree of farsightedness. If it turns out to be a negative number, then you can consider yourself nearsighted. 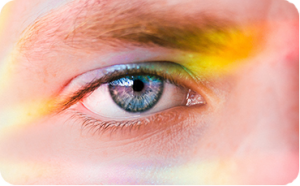